John Oliver, a renowned 'progressive' TV host in the USA made us a great favor. He proved, once and for all that: first, US 'progressive' ideas have nothing to do with 'left'; second, US corporative mainstream media is made of nothing but utterly and pitiful Orwellian propaganda with not a single shred of logical reasoning, facts or truth; third, US citizens (those sneering jellyfishes attending the show and all the fans of Last Week Tonight) are far more brainwashed and stupid than the most retarded being living inside North Korea borders.

But let's be fair. Let's watch the totality of his preposterous deprecation of  Venezuela:

Then, of course, one must search about and debunk this childish propaganda mixed with pure LIES. I propose both. I watched Mike Prysner analysis on John Oliver's lies and I highly advise you to watch it too. Compare the childishness of John Oliver's non-arguments (Maduro eating a banana) with the deepness of Mike Prysner's counter-arguments based on facts such as: official UN statistics, footage contradicting John Oliver's assumption, articles of the Venezuelan constitution, etc.)

Having watched this special episode of Empire Files (one of the most brilliant and provocative TV shows on Venezuelan Telesur English), one should do some researching too. To check the facts, of course. Aren't Western lying media supposed to adore 'fact-checking'? Well, so let's do it! Let's fact-check all the lies and offenses John Oliver said live on HBO (US mainstream lying media).

Let's do it. If we do so (and I did it before John Oliver's show on Venezuela and Mike Prysner's reaction), we will easy understand why John Oliver is a scandalous liar working on an Orwellian US media, and why Mike Prysner is so right.

The idea is to invite you to watch a list of unmissable documentaries and debates on this hot issue. And better, to read also unmissable books and documents (including US declassified documents) on this same hot issue.

Most of people breathing in and breathing out in this round-shaped rock are pretty sure Venezuelans live under the brutal rule of a mad dictator. Yet, all those thinking likewise, spent zero seconds of their lives researching about Venezuela. All they (don't) 'know' was 'learned' watching the same mainstream media that were 100% sure about plenty of lies with outrageous consequences:

I mean, if you think Venezuela is a dictatorship were people is starving, you are probably a victim of your own illogic approach towards reality. Of course you can't count on those who lie to you all the time about every important political issue... to be the source of information about Venezuelan political situation! Of course you can't! And by the way, if you believe Venezuelans are starving to death and you have no idea that in Yemen millions of people are literally starving to death thanks to the unspeakable genocidal crimes committed by 4 terror states (USA, UK, Saudi Arabia and UAE), you definitely need to do some research. So let's start researching!

A few months ago, the US journalist Abby Martin (host of Empire Files) did this series of short-documentaries on the so called Venezuelan economic crisis:

Inside Venezuela's Markets: Propaganda vs. Reality

Two days ago, another brilliant US citizen, Lee Camp, interviewed Abby Martin in his show Redacted Tonight VIP (his main show Redacted Tonight is even better, hyper-critical, hyper-informative and hyper-provocative). As you can guess, they talked about John Oliver's piece of pitiful propaganda.

John Oliver's main 'concern' about Venezuela is the bad shape of its economy. He had some fun vomiting childish empty anedoctes, but he never mentioned the reason behind the so called economic crisis and didn't expose the US and Venezuelan criminal sociopaths behind it. What a shame!

To debunk all the childish lies about Venezuelan economy you can read the report made in the US on the economic and social indicators of Chávez administration.

And to understand why and how artificially created from abroad is the economic 'crisis' in Venezuela, read this book:

US INTERFERENCES IN LATIN AMERICA

Ohhh man, 3? Really, only 3? John oliver said US only interfered in 3 countries! What about Nicaragua 2018 (now)? And what about Venezuela 2002-2018? And Honduras' coup d'état in 2009? And Haiti coup d'état in 2004? What about the bombing and military occupation of Granada in 1983, one of the tiniest nations on Earth? And the dozens of years of proven and recognized terror acts against Cuba (shooting down civilian air-crafts, poisoning water supply facilities, burning and infecting plantations with deadly bacterias, etc.)? And Brazil 1964? And Panama 1989? And the coup d'état in 2002 against Hugo Chávez? And so on...

2 incomplete lists of US criminal and illegal interventions in Latin America:

But sure, lists are not enough. We must fact-check what his said in these lists. A perfect document where to start searching about US criminal interventionism in Latin America is the book What Uncle Sam Really Wants, by Noam Chomsky:

Also crucial reading is a list of books written by the US-Venezuelan researcher named Eva Golinger. Please try to find and read the English versions of the following books:

Furthermore, we should understand why and how the US Terror State implemented and still implements all this despicable crimes against humanity. To do so, one must read this book:

Or, at the least, watch this documentary:

US INTERFERENCES IN VENEZUELA

And by the way, USA interfered and keep interfering a lot in Venezuela. While the average Joe in the US loves the criminal Trump or hates the criminal Trump (and therefore loves the Clinton criminal gangsters) and buys the most absurd lie ever told (Russia interference in US elections), the US interferes in everything possible in Venezuela without the knowledge or concern of all those brainwashed Joes. Although all these illegal and often criminal interferences are paid by US tax payers, most of them never heard about the US organizations behind it:

If the average US citizen knew something about these institutions and about the hundreds of millions of dollars annually spent on these institutions whose the acknowledged intentions are interfering as much as possible in everything possible in order to destroy insubmissive leftist governments, first, he would be ashame to talk about the Russia interference anecdote and, second, he would do or should do what the brave Ken O'Keefe did: renounce US citizenship. And he should learn Spanish just to be able to read the book La Agresión Permanente in which, one by one, all this criminal US institutions are exposed!

Going back to US interventions in Venezuela, it was absolutely ridiculous to watch John Oliver skipping the most obvious one: the US sponsored coup d'etat in 2002 against Hugo Chávez! I remind you that John Oliver was precisely talking about Venezuela! What a shameful circus!

Instead of explaining it, I propose 2 very interesting documentaries, the first by the best journalist alive, mister John Pilger:

The Revolution Will not be televised

Yes, yes, instead of blaming Russia for the interferences Russia did not do, US citizens should focused on the criminal US interferences committed all over the planet. Yes, you do interfere a lot, not only politically, but also military and economically.

For instance, 1 million communists (plus relatives and friends) killed in Indonesia in 1965 was USA fault! The killing of the socialist, brave and democratically elected president of Congo was USA fault! If USA wouldn't have intervened, killing Patrice Émery Lumumba in 1961, instead of a capitalist market of human slaves, Congo could be a prosperous socialist nation. Mohammad Mosaddegh was the head of the Iranian democratically elected government that was illegally removed in a CIA coup in 1953. And so on. There's too many examples! It takes several lives to mention all the US criminal interferences around the world.

But well, a perfect book to start exploring the omnipresent US criminal interferences is the book The Shock Doctrine, written by Naomi Klein:

By far the most democratic constitution among the countries with representative democracy systems. For instance, it is possible to take down a government by collecting a certain amount of signatures, giving its citizens the power to remove a democratically elected government that doesn't do its job. And by the way, US constitution, in many aspects, when compared with the Venezuelan constitution, is a very bad joke!

You want to know more about? Just read it:

USA media and the media of all US vassal states say that the democratically elected government of Venezuela crack down on 'peaceful' protesters and oppressed them. Not only this accusation is totally false (no evidences whatsoever), but worst, this "oposition" is NOT peaceful. It is not peaceful to burn pro-government people alive, burn public hospitals and universities and kindergartens, destroy dozens of tones of stored food, destroy and burning public transportation, close public roads, fire rockets against the police, exploding bombs resulting in the death of pro-government civilians and policeman, etc. You must be a jellyfish to buy such Orwellian false 'truth'. If you think otherwise, please try to act the same way in the USA or in the UK, and then tell me how did the police reacted to your 'peaceful' crimes.

Below there's a list of evidences of what I just said. I could show you more, but unfortunately the censorship imposed by Facebook and Youtube / Google (2 US companies) destroyed a big part of these evidences previously available online. If you don't believe me, count in this article of mine how many videos are no longer available:

And in this one, half of the links (to Facebook and Youtube videos) with evidences against Venezuelan opposition are no longer available:

But well, let's check the evidences of terrorist acts committed by the US sponsored 'peaceful' opposition in Venezuela: 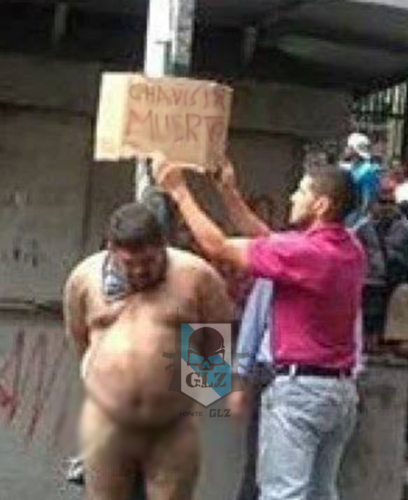 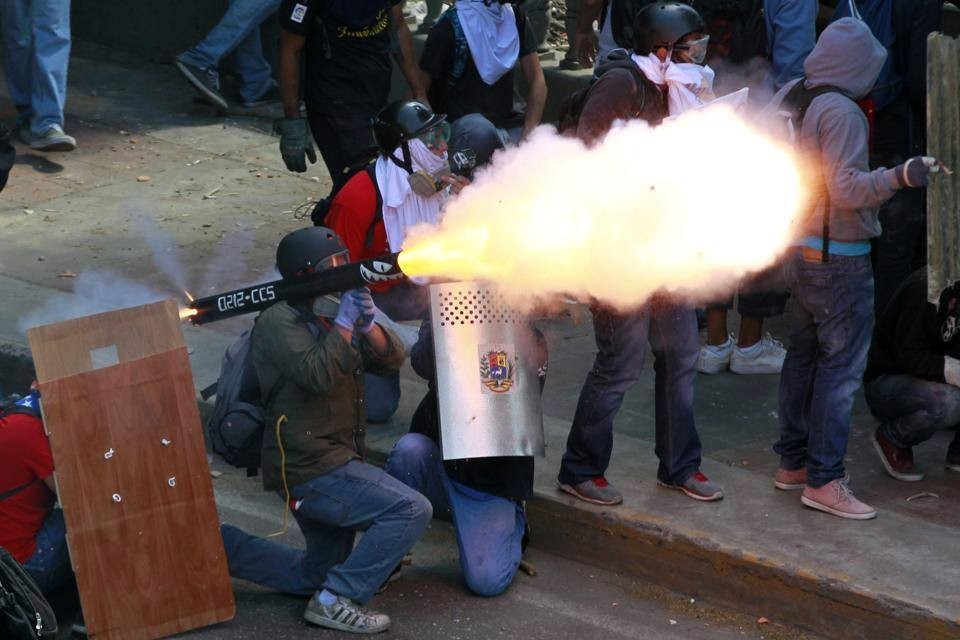 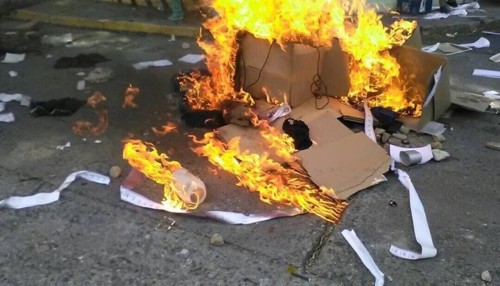 7. Two Venezuelan policeman beaten up and then forced to walk naked by the 'peaceful' opposition: 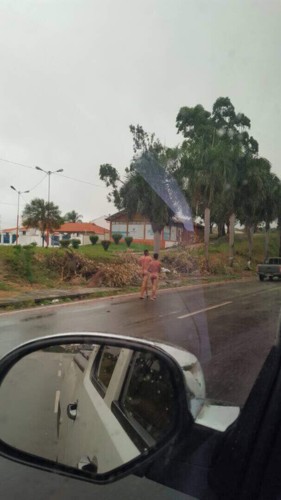 8.  'Peaceful' opposition cutting down trees in public street to block them:

12. Pro-government man shot dead and then burned by the 'peaceful' opposition 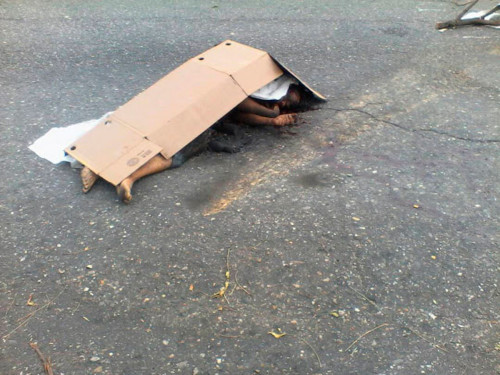 13. Black man burned alive by the 'peaceful' opposition who said racist words about him

14. 'Peaceful' protesters set fire on a young pro-government person inside a shopping mall:

15. 'Peaceful' protesters burn and destroy the house of a humble government supporter:

17. Young man jumped into the void when he was caught in flames during an attack comitted by 'peaceful' protesters 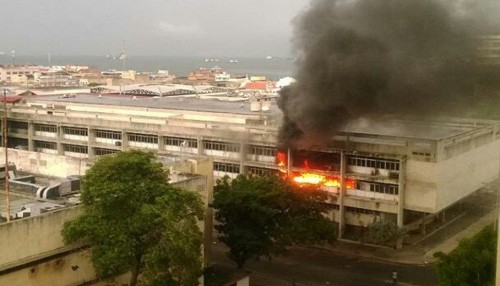 I think you got it. These US paid 'protesters' are not peaceful. They are violent,  incredibly violent. They commit terror acts and not protests. To commit terror acts is, of course, called terrorism! Only a serious crisis of cognitive dissonance can make Western people believe otherwise. And yes, I said "believe" and not "know". Most of Western human-jellyfishes no longer "know" anything, they only "believe" in postmodern nonsensical misinformation said to be "highly likely" true.